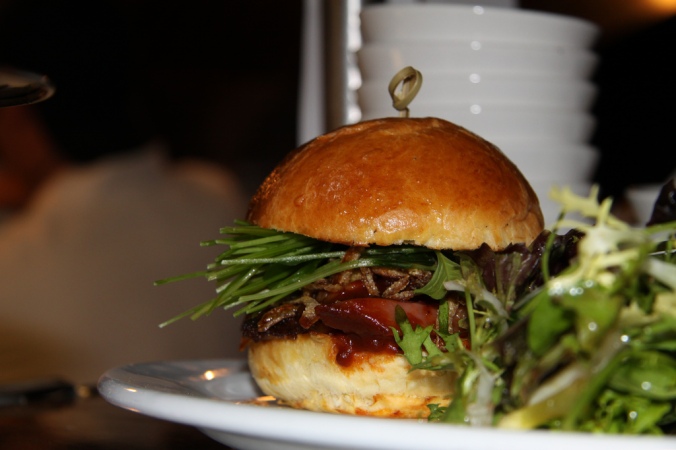 Lunch is the meal I eat most at the restaurant, and I never get bored. It’s partly because I get hooked on menu mainstays like Rock Shrimp Salad, but it’s hard not to mix it up with the constant flow of solid daytime specials from two of our most creative and hardworking hot line cooks, Manny Sulbaran and Michael Uffendell.

Just get a load of the new soups that have run over the past two weeks: Chicken Vegetable, Pasta Fagioli, Cream of Carrot, Short Rib & Vegetable, French Onion, White Bean, & Swordfish Chowder. Then there was the Duck Panini, and Pork Sausage and Palmetto Creek Ham sandwiches.

Our fish sandwich setup is pretty regular, but one of my favorites, with a seasonal slaw (like carrot and apple,) herb mayo, and brioche, plus whatever’s coming in from local waters from fisherman George keeps it fresh.

But back to the specials…  The Curry Calabaza soup and BBQ Brisket sandwich I tasted at pre-shift on Tuesday just about put me over the edge. I had to visit the guys during service to snap some photos of them in action.

The hot line is a crazy place, but there are a few nooks where I’ve learned to burrow to escape the fiery pop of an errant crispy hominy kernel or pan of sizzling escarole flying from burner to wood burning oven.  It’s mind boggling how these seasoned MGFD hotliners juggle components for dishes coming out of other stations, not to mention fried items.

See Manny and Mike’s set, now on our Flickr.  So what’ll it be today, gentlemen?