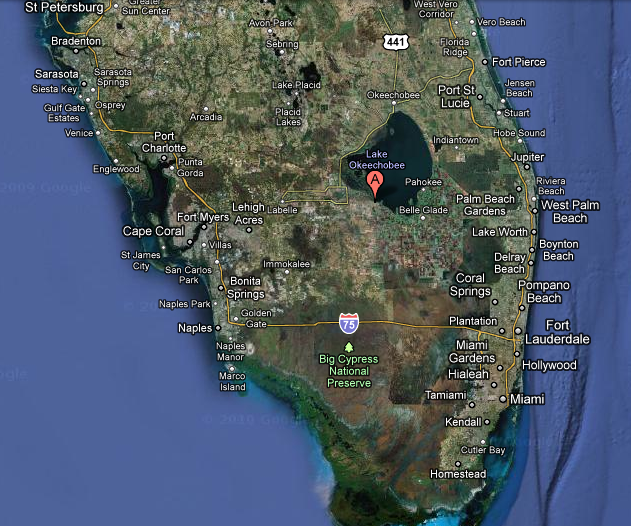 Early Sunday morning, while most of us were sleeping (yours truly included,) two chefs traded clogs and Converse for camo and hit the road with their fisherman to go wild boar hunting.

“We had so much fun,” explained George Figueroa of Trigger Seafood — something more of a fixer for Michael than just a fisherman. He knows the right people in the right places to source wild South Florida ingredients like frogs legs.  On their last outing, George took Michael to an early point of Big Cypress in the Everglades to meet fisherman Mike Sands and gig wild bullfrogs.  Yesterday it would be feral hogs upstate with guide Jeb Rou.

Michael brought along chef de cuisine Bradley Herron, and at 4:30 a.m. they traveled from Palmetto Bay just south of Miami to just north of Cleweston on the southern rim of Lake Okechobee. 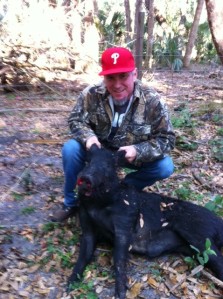 “[Michael] never had a rifle in his hand before,” George continued to explain late last night when I called him for the skinny on the hunt. “‘He was nervous!  When he saw the animal in front of him, he started breathing deeply. Your adrenalin really gets going!”  Michael hit his target clean, and George closed the deal with his pocket knife.

As for the shotguns, the four had three: a Benelli 12 gauge buckshot, a 243 Winchester long range rifle, and a 300 Winchester short magnum long range.

To first locate their targets it took them about two hours roaming around on a custom swamp buggy like something out of The Terminator. Bradley got to know George’s gun’s recoil a little better than he might have wanted and has a fancy bruise to prove it on his forehead, but for his efforts (which included a chase!) also got a nice hog.

They cleaned and field dressed the kill, and George, true to form, delivered the two chefs home safely later that afternoon. He’ll bring the two hogs to the restaurant just after lunch today.  We aren’t able to sell them, but hear serving complimentary tastes are allowed.  I’ll be Tweeting what the chefs end up doing, and for those of you who are interested in an outing of your own, George is happy to connect you with Jeb.  Let us know in the comments below.