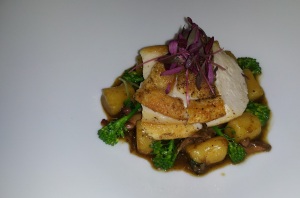 Saturday, December 15 Michael’s new winter menus set sail on the Oasis of the Seas for the next three or so months at 150 Central Park! After a year of sourcing locally from small, heritage producers for the ship, and now that we’ve come into our growing season again down here, this new set of menus is the most chock-full of great product yet, with five of our favorite producers represented. We have another showing for Poulet Rouge from Ron Joyce in North Carolina, beautiful grass fed beef from White Oak Pastures in Georgia, Loxahatchee’s Swank Specialty Produce greens, onion sprouts, and baby vegetables like carrots and eggplant, Borek Farms heirloom tomatoes (finally in season!) from Homestead, and newcomer Sem-Chi brown rice care of Bee Heaven Farms’ Margie Pikarsky and grown by Florida Crystals in Belle Glade, Palm Beach County, an ingredient used in Michael’s Genuine Home Brew and also as a nutty base for Pan Roasted Scallop with butternut squash, brown butter, and Swank Farms Watercress. Consider us the tumbleweed of the seas, collecting farmers as we roll out new menus! Chef and Eric, aka the Royal Pairing, are on implementation duty in a couple of weeks sailing the eastern route, and I have my fingers crossed someone will hook me up with some pictures of all the dishes below or at least some fun shiplife stories from the casino (hint, hint gentlemen!)

END_OF_DOCUMENT_TOKEN_TO_BE_REPLACED

As previously posted, we are prepping fast and furious for the second annual Slow Food Day event in the Cayman Islands, this year welcoming visiting chef Hugh Acheson!  Slow Food Day 2013 is made possible through a collaboration of local chefs and farmers and is comprised of a famers market tasting and Slow Food dinner with the goal of generating demand, as well as more opportunities for farm-fresh products to show up on restaurant menus and grocery shelves across the island.

We are excited to announce that tickets are now live for the main event, the Farm-to-Beach dinner at Camana Bay Beach!  Kick off your shoes and enjoy Hugh’s fresh approach to Southern food as he explores the local cuisine and its ingredients in a feast on the sand, with support from the Michael’s Genuine kitchen including chef Schwartz and his executive chef on-island, Thomas Tennant.  After last year’s amazing inaugural event with Jonathan Waxman at the restaurant, it’s the first time we are taking Slow Food Day to the beach, and frankly, we think it’s about time!  The meal will include passed snacks, dishes put out from stations on the sand, a pit with delicious local meats roasting and smoking, and, of course, plenty of cocktails and wines that love the beach care of Wine Director Eric Larkee.  Our local farmers will join us to celebrate their labor of love, prepared fresh, simple and pure.  Copies of A New Turn in the South will be available on-site for purchase and signing by the chef courtesy of Books & Books in Camana Bay. The fun begins at 5:00 p.m. at Camana Bay Beach Park off West Bay Road at the Coral Caymanian site next to Royal Palms. Stay tuned for updates on the menu, travel and accommodations ideas and any deals we can conjure from gateway cities like Miami, and most importantly, snag your tickets while they last! See you in the sand! END_OF_DOCUMENT_TOKEN_TO_BE_REPLACED 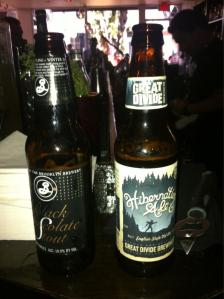 We like to drink seasonally and so should you, so a few changes are hitting the @MGFD_MIA beer list today reflecting what some of our favorite brewers are putting out there right now. To keep it simple, we are ricocheting some info that arrived in our inbox care of Beverage Director Ryan Goodspeed here for your beer edification, and have also elaborated with some fun facts and suggestions of what to eat with the new brews from our menus at home base. For up-to-the-minute beer list changes that may not always be posted on the blog, please follow @MGHomeBrew, the Twitter handle of our American Ale that will transmit them exclusively moving forward! Cheers to the Miami winter #oohlala.

END_OF_DOCUMENT_TOKEN_TO_BE_REPLACED 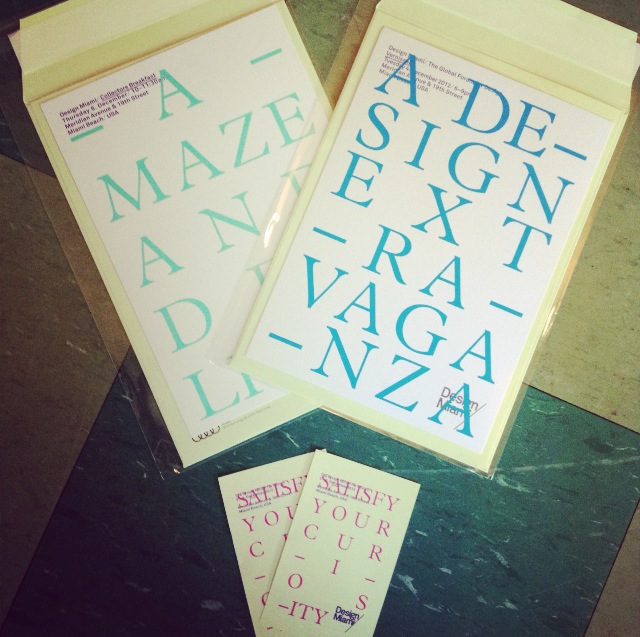 Update: And the winners are……. Dave Cristafi @SFLBeerBlog (Vernissage,) Steven Scharf @TheChowfather (Collector’s Breakfast,) and Susan Warner (General Admission.)  Please email us at thegenuinekitchen@michaelsgenuine.com to claim your spoils by end of day today so we can get them to you in time!  Winners were chosen completely at random through a virtual wheel of fortune type method care of @elliesara with witness @sarAllyce!

We’re getting really excited about next week when Art Basel and myriad satellite fairs hit town. It’s our busiest week of the year, and this one will be the most hectic ever, with the addition of our first cafe at Design Miami/ on Miami Beach and our new beer, Michael’s Genuine Home Brew, popping up all over town.  To celebrate and say thanks for your support, we’re giving away a selection of special passes to our events.  To be entered, all you need to do is follow @MGHomeBrew on Twitter or like us on Facebook by 12 noon tomorrow, Tuesday, November 16 when we’ll pick two Twitter followers and one Facebook fan at random who will each win one of the following:

Also, in addition to its current availability, Home Brew will be on-draft courtesy of Drink Like a Local in the new Basel Biergarten at Wynwood Cigar Factory (101 NW 24th Street) from  2 to 11 p.m. from Thursday, December 6  through  Saturday, December 8, and until 6 p.m. on Sunday.

Regardless of if you win, we hope to see you out at the tents!  Drink up, connect with us online, and good luck! 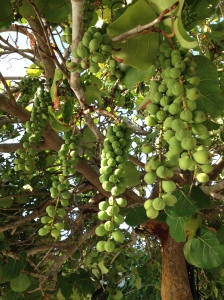 As growing season arrives in South Florida so does our annual event celebrating native ingredients with Slow Food Miami: the Ark of Taste Fundraising Dinner.  The Kampong plays host for the second year in a row on Thursday, November 29, and Michael, Bradley and Hedy are up to the challenge of creating a menu around the unique ingredients being nominated for 2013: the Florida Sea Grape and Royal Red Shrimp.  All proceeds will benefit both Slow Food Miami’s Edible School & Community Garden Program and the Kampong of the National Tropical Botanical Garden.  As Slow Food Miami’s largest fundraiser of the year, the annual Ark of Taste Benefit Dinner is an elegant evening beginning at 6:30 p.m. with cocktails featuring Snail of Approval winner Grey Goose Vodka and hors d’ouevres under the stars and overlooking the same lush grounds Dr. David Fairchild and his famous visitors once enjoyed. A seated multi-course dinner follows, celebrating South Florida’s Sea Grape and Royal Red Shrimp, sourced from Florida’s own Bee Heaven Farm and Wild Ocean Seafood (respectively.) A special selection of wines available at Whole Foods Market – Coral Gables will accompany the evening.  Click here for the menu and the following links for 2011’s and 2010’s events in pictures!

The US Ark of Taste is a catalog of over 200 delicious foods in danger of extinction – – threatened by industrial standardization, the regulations of large-scale distribution and environmental damage. Only the best-tasting endangered foods make it onto the Ark, in an effort to cultivate consumer demand—key to agricultural conservation. This year we are excited to be celebrating two versatile and delicious South Florida foods – the Sea Grape and the Royal Red Shrimp. By promoting and eating Ark products we help ensure they remain in production and on our plates.

Sea Grapes typically ripen between July and October. They make an amazing, light jelly, and can be used in wine and other ways. The most common way to eat sea grapes is as like all other grapes – rinse and pop in your mouth. Indigenous to coastal areas of South Florida, the West Indies and tropical America (Central America and northern South America), sea grapes are wonderful edible landscapes which many people already have growing. Most Floridians do not know that sea grapes are edible and delicious!

Royal Red Shrimp are a deep-water species whose taste is as unique as its appearance. Most importantly, several pockets of them are found off Florida waters making them a viable Florida fishery/resource. As with most domestic product that has seen its imported counterpart (ninety percent of all shrimp consumed in the United States are imported), Florida shrimp have consistently seen a decrease in value, its shrimping fleet and culture.

“The Ark of Taste Benefit Dinner is a chance for us to champion our native ingredients. We are honored Michael Schwartz and his team are preparing the Ark menu for the fourth year. We are excited to support our local farmers, fishers and foragers who keep these foods and their traditions alive. This event will help us fund 120 Edible School Gardens this fall as well as support the biodiversity growing in the Kampong National Tropical Botanical Garden.” said Renee Frigo Graeff, Slow Food Miami President.

Tickets are $250 per person and can be purchased here.  The Kampong of the National Tropical Botanical Garden is located at 4013 South Douglas Road in Coconut Grove, Florida. The Kampong contains a fascinating array of tropical fruit cultivars and flowering trees. The garden is named for the Malay or Javanese word for a village or cluster of houses. Heritage collections from Indo-Malaysia, Southeast Asia, Central and South Americas, the Caribbean, and other tropical locales create a cornucopia of exotic fruit, including over 50 varieties of mango. Numerous species of palms, cycads, and flowering trees are studied by scientists from the world over. The Kampong serves as the mainland campus for the NTBG’s educational courses, as a living classroom used by universities and colleges for botany and horticulture courses, and is a popular spot for plant enthusiasts of all ages. The property is listed on the National Register of Historic Places.