UPDATE: Piglets for Harry’s Pop-Up tonight are rolled up and now rolling on The Cypress Room’s rotisserie (with a little caul fat to seal in all the juice and crisp up the skin, of course!) We still have a few tickets left, available at this link! 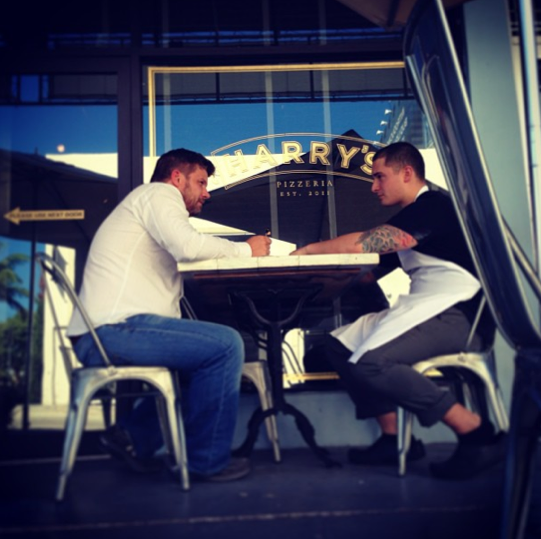 Chef Ben Ford has landed safely in MIA and is ready to rock Harry’s Pizzeria tomorrow night for our October Chef Pop-Up!  Yesterday, we whisked by the restaurant to check in with sous chef Steve Martin and have a bite to eat.  It was still brunch time, so the meal consisted of one of the most decadent French toasts I’ve ever had, thanks to our baker Embarek “Ali” Alibey’s filone.  Each delicate thick slice is dressed with egg and cream, then fried up until crispy with golden-fingered edges and smothered with plumped raisins and crème fraîche.  Slice off a corner with your fork, and enjoy the contrast of textures as the creamy inside melts in your mouth. I’d be done for the day, had there not been a Slow Roasted Pork pie and Crespelle around.  Refreshment was in order, in our case beer, so Ben decided on a Michael’s Genuine Home Brew, and I drank like a local with Due South’s Honey Wheat Ale.  Chef had just received the first chapter of his forthcoming cookbook for review and showed me a preview, including an upright device he fabricated himself to roast a hog.  It’s a feast for the eyes and the belly.  He’s working with some of the folks with whom Hugh Acheson created his award-winning A New Turn in the South.  A recipe for a book as beautiful as it will be delicious.

Ben and a Boer kid!

A quick tour around his Instagram confirms Ben is a do-it-yourself kind of chef who thinks big.  In addition to raising his own Berkshires, he enjoys fabricating new cooking devices of all kinds worthy of handling the whole animal.  There’s a big tool shed in the yard that’s exercised often. When I mentioned our favorite Caja China here in Miami, he of course knew what I was talking about and has even devised his own longer version to fit a lamb.  Tomorrow night’s suckling pigs came in this morning and will be roasted whole, porchetta-style for tomorrow night’s third course.  Ben’s getting in today at noon to brine them with Steve, and we are excited to find out how they’ll be cooked.  A feast for the eyes and the palate, that’s for sure.
Click here for tickets to Ford’s Filling Station Pizzeria, and see you at Harry’s tomorrow!