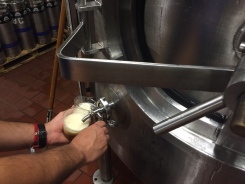 In preparation for Harry’s Design District beer pairing dinner on Tuesday, March 29, we are following along as TGHG’s Eric Larkee and Amanda Fraga visit with each contender to get a feel for the flavor of their operations and strategy with chef Bradley Herron’s menu.   First up, Biscayne Brewing Co.  Don’t forget to purchase your tickets here!

Located in Doral, this one and a half year old brewery found a space where it has the luxury of room to grow, into about 12, 000 square feet.  Out of its current three tanks (two 30-barrel fermenters and one 15-barrel,) the brewing facility is pumping out about 60-75 barrels a month.  They have settled into four core styles in the portfolio, including two barrel-aged working, and are thoughtfully, steadily expanding. “We want to hone in the recipes, and put out the right beers,” Ronchetta explains.

La Salida was the first barrel-aged product, using Bourbon casks with IPA. “We didn’t really know what was going to work, but people still ask for that beer, ” he recalls.  “We liked what we tasted, so we took Colorado’s Stranahan American Whiskey barrels and made a Scotch ale, crafted with a little more intent.  It came out great.”  Buenas Noches, an Imperial Stout, followed in the same barrels, coming in at 10.1% ABV.

Owners Gus Chacon and Jose Malles have focused on draft distribution at bars and restaurants, a world Malles knows well coming from the restaurant side (The Local Craft in Coral Gables.)  It’s a familiar model for young breweries that are kegging and still working on the capacity to can or bottle, but serves as a smart way to connect with the community and find an audience at a grass roots level and really grow from the ground up.  Look for its first tap room to open in May (8000 NW 25th St, Doral, FL 33122,)  joining MIA Brewing as Miami’s second craft brewery located west of the Palmetto Expressway.   “Doral is really up-and-coming,” Ronchetta continues.  “There is a whole new audience living and working in the area. Lots of opportunity to reach the happy hour crowd and getting people in front of the product where it’s made is huge.”

When it comes to pairing beer with food, Ronchetta is always looking for the complementing factor.

“Darker beers with more roasted notes go great with braised meats and roasted vegetables while lighter beers can go with simpler fish and chicken dishes. I never want the beer to overwhelm the palate and takeover the senses, leaving the food bland,” he says.

For the reception, Biscayne is offering the Miami Pale Ale, a statement beer for the brand because besides being one of the original launch styles and best-selling overall, it’s brewed in a certain fashion that almost makes it sessionable.  Easy does it in the beginning.  It’s an expression of the brewery’s approach to how they make beer — very classic and crisp, sticking with traditional brewing styles with little embellishment.  When they do offer a twist, it’s cleanly and purposefully — as in the La Colada Poffee Porter, a foundation of rich history, balanced by local flavor.

“This is ultimately a beer & food pairing competition, not a best beer,” Ronchetta reflects. “We’re going with what we believe to be the best paired offerings from our lineup and the judges will hopefully choose the best one (ours!)” 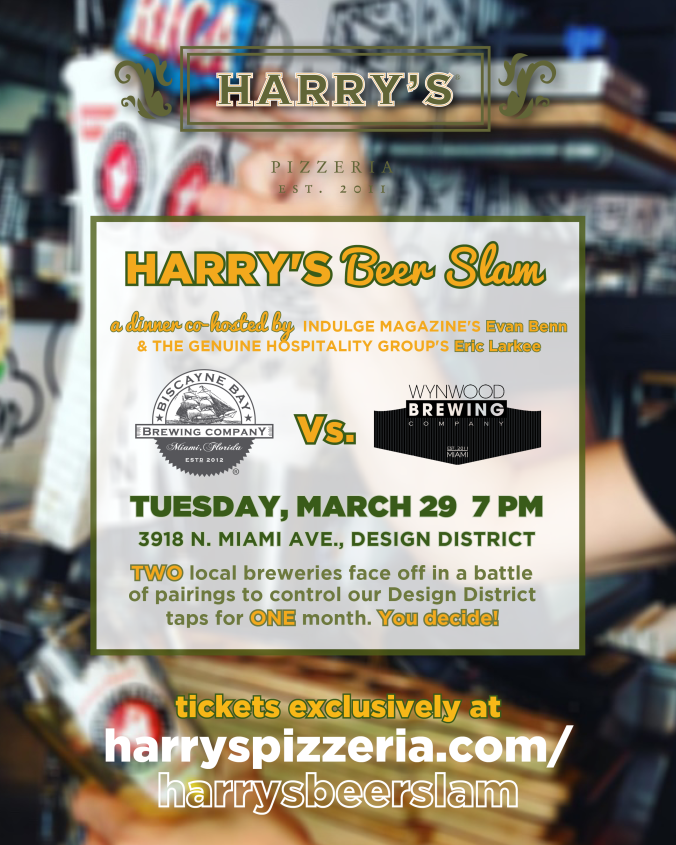