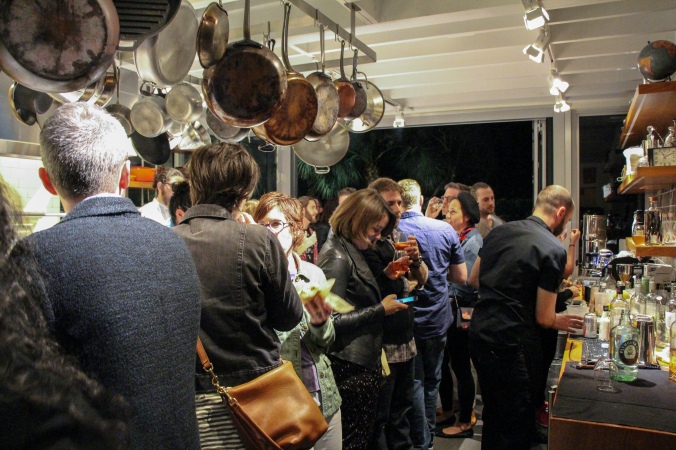 From one big shindig to the next.  With another Art Basel in the record books, we’re laser focused on finishing 2016 strong, whether with loads of Genuine Gifts (including and especially gift cards!) and New Year’s Eve specials at Cypress Tavern and Harry’s Pizzeria (stay tuned for that announcement on Monday!).  But for now, we’d like to introduce you to The Genuine Hospitality Group’s events at next year’s South Beach Wine & Food Festival before they sell out.  Check out the parties listed below with their corresponding participating TGHG restaurants.  Cheers… Training your body to get through it all begins now.  Thanks again to Lee Brian Schrager for inviting Team Schwartz to play again!

MICHAEL’S GENUINE® FOOD & DRINK | 10 Years of Genuine: Dinner hosted by Michael Schwartz, Marc Vetri and Jonathan Waxman presented by Bank of America
7:00 PM – 10:00 PM @ 130 NE 40th Street, Miami, 33137
> Dressy Casual Attire, Indoor, Seated, Wine, 21 years of age or older <
One of South Florida’s most widely recognized culinary innovators makes a rare Festival appearance to celebrate a decade of his much touted Michael’s Genuine Food & Drink. A must-stop for both locals and tourists from around the world, Schwartz took a leap on the burgeoning Design District neighborhood 10 years ago to start his empire. Now settled smack in the middle of one of Miami’s hautest areas, Schwartz’s flagship restaurant anchors the array of culinary attractions offered there. Joined by culinary luminaries Marc Vetri and 2016 SOBEWFF® Tribute Dinner Honoree Jonathan Waxman, Schwartz and friends will present guests with a sampling of the signature tastes with staying power they’re known for.  Guests will be assigned seating prior to this event. We can only guarantee guests who purchased tickets together will be seated together. If you would like to be seated with another guest(s), please send your request via email to tickets@sobefest.com. PURCHASE TICKETS

HARRY’S PIZZERIA® and FI’LIA |  Barilla’s Italian Bites on the Beach sponsored by HCP Media and the Miami Herald Media Company hosted by Valerie Bertinelli & Alex Guarnaschelli
7:00 PM – 10:00 PM @  the “North Venue”, Beachside at Delano, Entrance at 1 Lincoln Road, Miami Beach, 33139
> Outdoor, Smart Casual Attire, Spirits, Walk-Around Tastings, Wine, 21 years of age or older <
What do Hollywood Walk of Fame stars and Michelin stars have in common? Leading ladies Valerie Bertinelli and Alex Guarnaschelli, of course! Bertinelli’s two-time Golden Globe Award-winning personality now charms on Food Network’s Valerie’s Home Cooking, while Guarnaschelli’s Michelin-starred training in France helped mold the tenacious expert we enjoy today on Chopped. They are joining forces to host more than 30 of the nation’s greatest chefs serving up dishes originating from various regions of Italy as guests enjoy a live musical performance by soft-rock hit makers Little River Band, presented by Magic City Casino. Known as one of Australia’s most popular rock bands, the Little River band has 10 top 20 songs on U.S. Billboard charts, including ‘Reminiscing’, ‘Cool Change’, and ‘Lady’. You can peruse Piedmont, trot through Tuscany, savor Sardinia, canvas Campania, saunter through Sicily, and more – while sinking your toes into the sparkling white sands of South Beach. Whether you prefer a traditional spaghetti and meatballs or a cooler antipasto-style pasta salad or a savory perciatelli and chicken, this is a celebration not to be missed. Grab your friends and gather ‘round under our signature white tents in the sand for a feast of the ages, all complemented by pours from curated wine selections. ADA Assistance: The Festival will have a limited number of beach wheelchairs available at the Guest Services locations. Please check in directly with a Guest Services Representative for assistance. PURCHASE TICKETS

CYPRESS TAVERN | Fontainebleau Miami Beach presents Wine Spectator’s Best of the Best sponsored by Bank of America
7:30 PM – 10:30 PM @ Fontainebleau Miami Beach, 4441 Collins Avenue, Miami Beach, 33140
> Dressy Casual Attire, Indoor, Walk-Around Tastings, Wine, 21 years of age or older <
To create the best event during the best weekend of the year, we’ve rounded up 60 of the nation’s top chefs to showcase their most gourmet samplings to pair with over 100 wines rated 90 points or higher on Wine Spectator’s scale. The Fontainebleau Miami Beach sets the perfect stage with its own blend of Golden Era glamour and modern luxury to host this grand walk-around affair. Only proprietors and winemakers from each winery are invited to pour their top varietals so you can hear about how some of the world’s greatest vino makes it from their vineyards to your palate. From aperitif to dessert, we’ll make sure your glass is decadently decanted and your plate is full of first-rate cuisine. PURCHASE TICKETS

FI’LIA | Brunch hosted by José Andrés and Michael Schwartz
11:00 AM – 2:00 PM @ SLS Brickell’s ALTITUDE Pool at SLS Brickell
1300 S Miami Avenue, Miami, 33130
> Casual, Outdoor, Spirits, Walk-Around Tastings, Wine, 21 years of age or older <
Savor brunch poolside at the brand new SLS Brickell under the spell of two of the most coveted names in culinary, José Andrés and South Florida’s own Michael Schwartz. Andrés, this year’s Tribute Dinner honoree, is recognized worldwide for his energetic passion for telling cultural stories through food. His chic and delectable mark can already be found at the SLS Hotel in South Beach at The Bazaar by José Andrés and Hyde Beach, and now at the buzzing epicenter of downtown Miami at Bazaar Mar. Schwartz, whose flagship Michael’s Genuine Food & Drink is celebrating its 10th anniversary this year and widely touted for putting Miami’s Design District on the culinary map, will join Andrés at SLS Brickell with his first-ever Italian concept Fi’lia. Guests will be assigned seating prior to this event. We can only guarantee guests who purchased tickets together will be seated together. If you would like to be seated with another guest(s), please send your request via email to tickets@sobefest.com. PURCHASE TICKETS