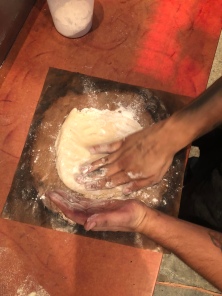 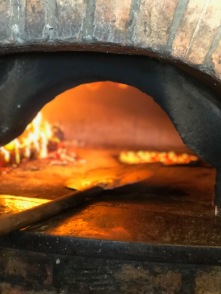 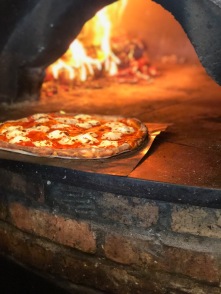 Executive Chef Bradley Herron came back from a recent Restaurant Trade show excited about a gluten-free dough he had discovered. He got a sample, made some pies, and everyone was impressed with the crust and the overall taste. It was lighter and more airy, clearly better than what we had been making in house.

We brought in the dough from Wild Flour Bakery in Boulder, Colorado in early August and the response has been great at Harry’s Pizzeria®. GF Pizza sales have grown from 1.9% with our old crust, up to 4.5% of total pizza sales with Wild Flour’s product.

I wanted to learn more about the company that produces the dough, so I reached out to Kim Desch, the founder and CEO of Wild Flour Bakery. Kim was a Nurse practitioner addressing autoimmune disease and gluten-sensitivity 10 years ago in California. GF wasn’t part of the everyday conversation around diet, nor dining out.

“Pizza is that go-to food which was always the downfall for my patients in keeping a gluten-free diet,” she says. 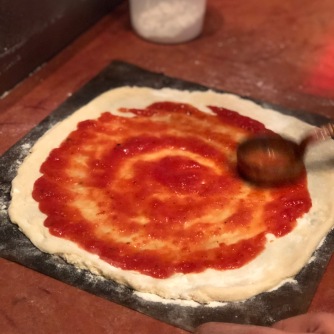 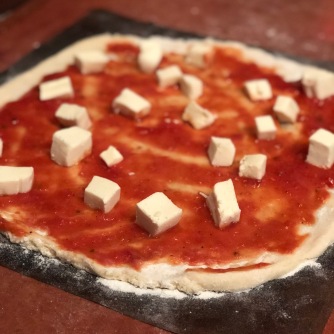 At about this time, she too was diagnosed with gluten-intolerance and so became keenly aware of how difficult it really was for her patients. “I became gluten-free and it really stinks.  The pizza was really hard. I had teenage kids and let’s face it, pizza is a necessity! I said to myself, ‘there has to be a solution that does NOT involve nasty, cracker-like, flavorless and weird-textured pizza crusts!”

Kim got started solving this dilemma — not a chef herself, but like any chef in our restaurants would. It took her two years of research and development “my family ate a great deal of bad pizza!” They moved to Boulder in 2011. She describes Boulder as the GF capital of the World. The Boulder environment has been great to test her pizzas and to hear back from chefs – who are the toughest critics. In time, she created and perfected her custom, yeast-raised, blended dough – a mix of starches and grains, all non-GMO ingredients. 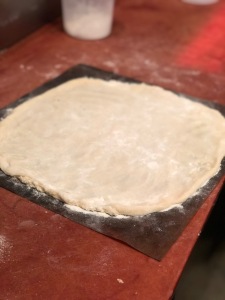 Wildflower’s GF dough doesn’t bake directly on the oven deck but is instead hand formed on this silicon mat avoid as little cross contamination as possible.

They now have been selling it for four years to restaurants with many satisfied chefs and many customers doubting whether this is truly GF.  “People called to say, they are sending the pizzas back – they don’t believe it. We tell people ‘Having a great gluten-free experience is possible, and we make that possible,” Kim says.

Chef Brad is excited about the response we have gotten to the new product and is looking forward to bringing it to Genuine Pizza™ when it opens in Aventura later this month. He particularly likes how well the dough behaves in our Marra Forni ovens, and how simple it is to work with. “We are excited to have a dough that customers enjoy and keep coming back to order again and again.” All pizzas at Harry’s Pizzeria’s three locations can be made with GF crust. Of course, there is a possibility of cross-contamination, as the restaurants are not GF environments, so we advise against it for cases of extreme gluten intolerance.

The process, as close to perfected as we can get. Until there’s something better!