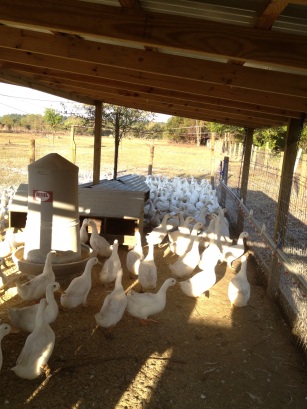 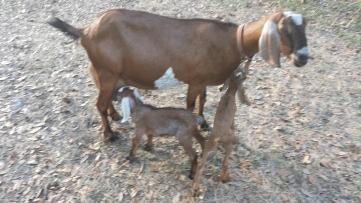 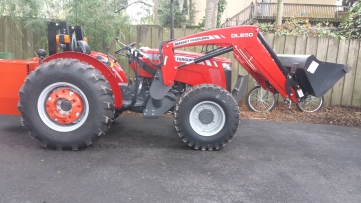 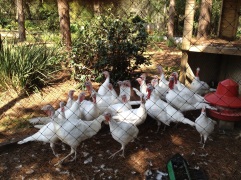 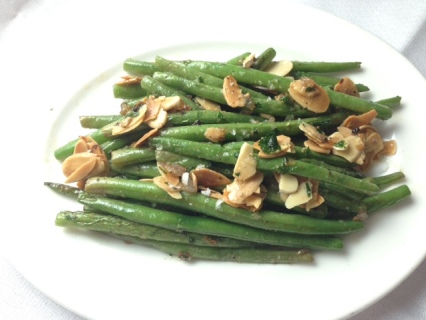 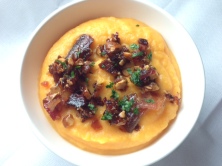 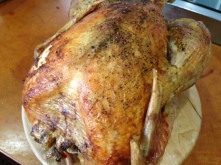 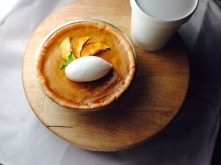 Happy Thanksgiving!  While our restaurants in the Design District are closed today, the work doesn’t stop for our genuine extended family.  Restaurant Michael Schwartz at The Raleigh is open for business and has a delicious line up for dinner with an “Extra Large” special, thanks to gorgeous heritage turkeys from Farmer Dale Volkert.  Up in Ocoee, Florida, it’s 56° F right now and his Lake Meadow Naturals flock is likely bundled up in the barn today after a brisk morning walk through the farm’s chilly dew-dropped pasture with their four legged friends. For Dale, thoughts of Turkey Day began long ago.

“We’re down to our last 3 live turkeys for sale and 2 of those are spoken for and down to a handful of processed ones,” Dale explains. “We raised both Midget whites and royal palms this year, we stopped raising the burbon reds as people did not like the little brown feathers that escaped the processing plant so we chose white birds.”

The Royal Palm breeders pictured above are behind the farm store, and they will start laying in January for his 2014 turkeys which start to hatch in February.  Next year the mix will be 70% midget whites and 30% royal palms.   As you might expect, heritage breeds do not get as big as commercial ones.

“What really amazes me as so many of the birds you see at the store at cheap prices are 7 to 15 % salt solution,” Dale continues.  “Our turkeys are just that. Turkey!  We think the Chef should start with a perfectly clean food to create their masterpices without added solutions of who knows what. We both know that Michael would never start with something added other than what nature intended.”

Birds of a feather flock together.

As for Dale’s bread and butter – eggs – the new egg grader that arrived last Thanksgiving has been wonderful for his farm’s productivity. In addition to washing and candling, of course they still hand pack all their eggs to insure best product.

“Our newest addition of farm partners is Roger and Peggy from Harvest Moon, just a mile away from us,” Dale shares.  “They raise broilers for us, duck eggs and also just had 40 baby goats the past few weeks one momma with 4 babies. Their regular farm business is produce but have space to raise some extra animals for us.”

There’s also a shiny new Massey tractor. Dale’s dad bought his first Massey 44 tractor on his birthday “more years ago than I care to think about,” he says. They needed a bigger one to handle the duties on the farm so this is in his honor and memory.

Have a delicious day with your family and friends, whether it is latkes or Turkey (or in our case both!), and we will be back on the mainland tomorrow ready to serve you.  This holiday, we give thanks for our flock…. you!

Spring is in the air at Lake Meadow Naturals in Ocoee, FL. Since 2010, farmer Dale Volkert has been our main source for eggs at Michael’s Genuine Food & Drink in Miami.  Since then, like us, the farm has grown from a small operation raising foul like feisty Rhode Island Reds, geese, ducks, and turkeys exclusively for egg production, with a few pastured cows, to a diversified, efficient operation serving restaurants like ours across South Florida with not only ample eggs but humanely raised and processed meat, including birds of all kinds like poisson and broilers, as well as lamb, goat and goose.

“Things are hopping here at Lake Meadows,” says farmer Dale Volkert. “All the animals are springing to life and in the reproductive mode for sure. The warm weather has made the turkeys and geese both start to lay early and we have a few turkey and goose eggs for sale before we start to incubate them for growing for Thanksgiving. We also got permission to harvest the livers from our Cornish hens, and these livers are hand harvested not machine harvested so they are beautiful lobes of chicken livers for appetizers and salads, pate and mousse…”

One thing new from Dale that we’ve been sinking our teeth into lately at Genuine HQ in Miami is lamb.  Specifically whole lamb. And Michael’s Genuine Food & Drink executive chef Bradley Herron is having a field day. END_OF_DOCUMENT_TOKEN_TO_BE_REPLACED 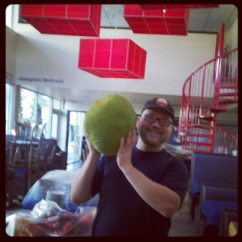 Recently, Ellie, a one time raw vegan for 6 months in 2008, attended a Love & Vegetables pop-up dinner hosted by Michael’s Genuine Miami line cook Keith Kalmanowicz. This is no ordinary pop-up, and not just because it happens to be vegan, nor because it is hosted in Little Haiti, the last place you’d expect the of-the-moment trend in foodie dining to crop up. “Love & Vegetables is magic and the amount of passion that the chefs have for food is mirrored by the level of consciousness put into every aspect of the dinner,” she explained. “The sweetness and pure joy that the chefs have towards each other and the sanctuary where it takes place is simply a pleasure to witness. And not in any of the time I was vegan did I have food as dynamic and delicious as was served.” Wait that’s peachy, but… a sanctuary? I had to get to the bottom of this, and start at the source, like we usually do here. And that was Keith. Keith, the line cook, who pays a visit to Omar in our back office on 39th street like clockwork each week, accounting for his visits to the market. Keith who I witness putting out the soup special the days I make it to lunch pre-shift.

Like most stories, there are those things at the surface, and then the juicy middles. This is one of those stories. I learned more from interviewing Keith about how our kitchen functions than I have in a longer time than I am willing to admit. Here’s why.

END_OF_DOCUMENT_TOKEN_TO_BE_REPLACED

While the growing season is winding down here in South Florida, up in Ocoee just outside of Orlando, Lake Meadow Naturals is alive with activity!

“Spring is a very busy time not only for ducklings, but for lots of animals that are being born and hatching,” explains farmer Dale Volkert. “We had 18 goats born the last 2 weeks, over 100 geese, 240 turkeys, guinea hens, 2 baby calves, let alone the batch after batch of ducklings. And ducklings are a lot of work when they start to hatch!”

We’ve been working with Dale and his team at Lake Meadow since fall of 2010 when we fell in love with his farm after a visit to shoot Michael’s television pilot, The Local Table.  Michael’s Genuine has been sourcing product from him for ever since; what began with heritage eggs including chicken, duck, guinea fowl, and goose has grown to include poultry such as broilers, fryers, and poussin — even goat.  We’ve placed an order for 18 ducks for SBRAGA Pizzeria, our Harry’s pop-up on May 22.  A lot can happen in a month!

“Ducks take about 28 days to develop inside the egg. Their egg tooth lets them cut around and through the shell and then push themselves out,” Dale continues. We then move them to a brooder, each holding 400 chicks which keeps them at 95 degrees and introduces them to water and an all natural diet of grains and vitamins.  We reduce the temperature 5 degrees each week until we get to room temperature and watch them closely. They drink a lot of water or should I say they like to play in a lot of water and they want more than they need but that’s just how ducks are. We then move them outside into duck hotels which we call them where they have more space to run around in and start to really enjoy playing in the water and enjoying life.  Once they get about 50% of their feathers on we let the doors open and they explore pastures and open spaces as they grow up into adult ducks.” 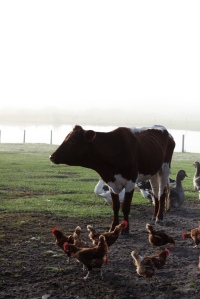 The Lake Meadow pasture is a beautiful thing.  It now plays home to 400 turkeys and 100 geese, baby ducks, and they even had to get donkeys.  They work wonders to control wild predators like coyotes, foxes and bobcats.

“We took the turkeys and geese
over to Jeremy and Heather’s farm who are farm partners of ours to raise them until harvest,” Dale shares.  “They have 15 acres and took a pair of our geese and the moment the babies drove in they were curious and adopted them as if they were their own. Geese are wonderful parents and very protective of even adopted chicks.”

Since we visited, the farm has updated its infrastructure, too, adding hydroponic gardens and several new chicken barns, three near the local farmers market and some up by the hydroponic gardens and orchard.  We can’t want to get back there!  For more information on Dale’s eggs, please find him featured in the current issue of Edible South Florida magazine. 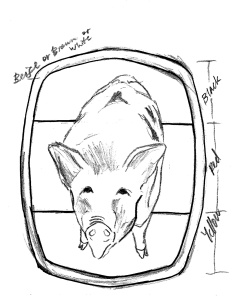 The highly anticipated futuristic saga hits theaters March 23, but our tournament of survival begins now as Michael and Bradley strategize how to tame a 200 pound hog they have never worked with in the kitchen before: the Ossabaw.

I’m speaking of course of their upcoming entry in the Cochon 555 competition, hitting Miami on April 1 at the Four Seasons Brickell. To satisfy my curiosity about the main ingredient all of which they must use to wow 20 judges and a ravenous crowd, I rang hog farmer and owner of Black Hill Ranch, Felix Florez, a sommelier by trade, but now passionately converted to raising seven breeds of hog, with the perfect hog in the works, on his 10 acre ranch in Houston, Texas. His family had always been into cattle ranching, but it was his work in the restaurant business since about 18 years old that ultimately led him to his calling.

“Because I’ve been in restaurants so long one of the things I noticed is how much product we were bringing from outside, and it never made sense to me why we weren’t using more that was local,” he explains. “So I made up my mind to get a piece of land and put animals on it and do what the best ranchers in the world were doing. I did a lot of studying what they were doing in Spain and Iowa.”