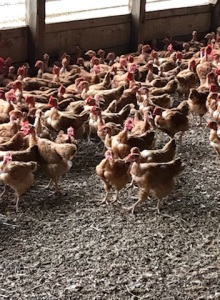 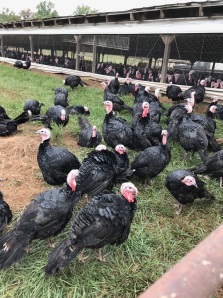 From soil health to genetics, North Carolina-based Joyce Farms does grass-fed beef right, because that’s the only way Ron Joyce knows. Standing behind the tasty intersection of tradition, science and passion, Joyce’s energy is palpable through the phone as we recount how a jet-setting French chick became a worldwide calling to find lost heritage breeds and do the work to raise them the way they’re supposed to be raised.

“No day is ever the same,” he says. “We were in meetings on Friday, and then I saw your missed call.  It’s one foot in this year and one foot in the next.” 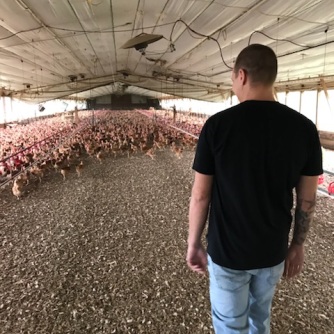 In November, Amara at Paraiso chef Michael Paley and senior sous Max Makowski paid Joyce Farms a visit to check in on his product mix and talk sourcing for our new restaurant’s menu including dry-aged grass-fed ribeye.  So for about a month now, I’ve been wanting to catch up with this man behind one of the most exciting ranching operations in the U.S.  It’s been much longer than that since we last connected — on Michael’s first visit in 2010 to get acquainted with the now so familiar bird on the Michael’s Genuine menu — Poulet Rouge.  Joyce left one of those impressions that sticks with you, though.  Something in his voice rang true.  Genuine…  The same voice greeted me on the phone last week, but with news to share about the his consortium of farms, the company’s focused growth and his current projects that have our ears perked.

“People eat our beef and they can’t believe the flavor. They also can’t believe it’s raised 100% on grass,” he says. “I cringe when my friends say it’s rough and you have to get used to the difference in taste. Most grass-fed beef isn’t appetizing, because it’s complicated to produce, and most are doing it wrong. This is unfortunate of course for everyone trying to do it right.”

Doing it right we learn is more scientific than we could have ever imagined, not to mention more expensive.  Ron explains that people tend to forget grain has been status quo since WWII. Corn is cheap, but it’s not natural and collateral damage included a shift in fat content from unsaturated to saturated, an increase in the presence of E. coli, and a change in the pH of the meat.

“When Michael Pollan published The Omnivore’s Dilemma, it was a game changer,” Joyce says. “Demand outpaced supply for grass-fed.  People were gravitating to it for the health benefits, like better Omega 6 to 3 ratio.”

The whole thing started with Poulet Rouge, and Joyce blames his father, who was with another livestock company in the ’50s and ’60s.  He would talk about how disappointed he was in how chicken had changed. 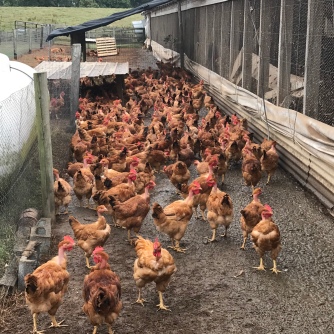 “As a younger person I put that off thinking this is about a guy getting older lamenting about the past and ‘the good old days’,” he explains.  “But then other people started saying the same thing. And then I went to France which changed everything. It made me realize that people don’t remember here in the States how it used to be.  Only the older folks do!”

Joyce explains that in Europe, they’re called industrial chickens, and most butcher shops, a fixture in every neighborhood, don’t sell industrial.  “You have a choice over there, and in many ways that’s the short term goal here.” 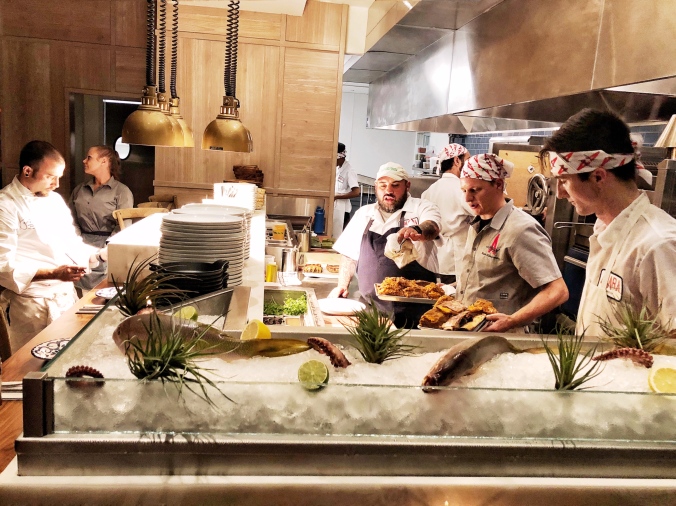 Chef Paley, chef Max and the team at Amara during one of four preview dinners this week. With the Art Basel pop-up wrapped, it’s time to shift gears for opening in January.

This chicken problem was the problem that got him started, and the French helped him chose the Label Rouge, a naked neck bird with thin skin at half the thickness of its industrial counterparts that renders crispy. It took Joyce a while to break even, but after they made these birds sustainable the question was naturally, what else?  In America it has been cheap and large for decades. The meat and poultry is market driven here.  It’s a give-the-people-what-they-want mentality that can be poison for a food system.  And labels aren’t helping.  They can be downright misleading. Free-range this, and pastured that.  Semantics, however, mean something.  They can mean everything. They can create a movement, even. 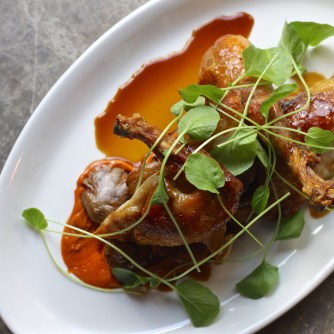 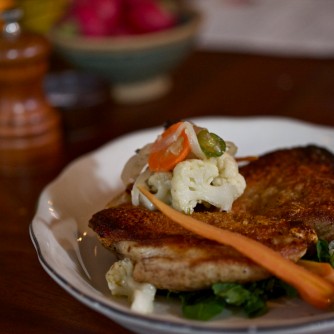 “Chefs were asking do you know anyone doing great grass-fed?,” he continues. “They would say how they’d get requests, and then dishes would be sent back! Feedback was that it tasted gamey and livery. Something wasn’t right and I knew it didn’t have to be that way. Then we found Allen.”

Disillusioned with what universities were researching and teaching on big Ag’s dime, this farmer, Dr. Allen Williams gathered a band of rebels and dropped out of the system to form a consultancy and started working on cattle.  They found that the genetics in the animal had changed to be efficient on corn.

“The animals simply didn’t do well on grass anymore,” Joyce explains. “Everything in a pasture has a purpose. If you plant a monoculture, one kind of grass and the grass is too green you get minerals and that off-putting taste. Fertilizer kills all the natural organic matter, especially weeds which are a natural dewormer.”

With no choice but to go back to the trough, a farm can get sucked into a viscous cycle that eventually kills everything. Soil becomes compacted. It loses the ability to absorb water, so there’s runoff and loss of top soil. “Animals have a strong sense of what they need to eat it, but if it’s not there.” 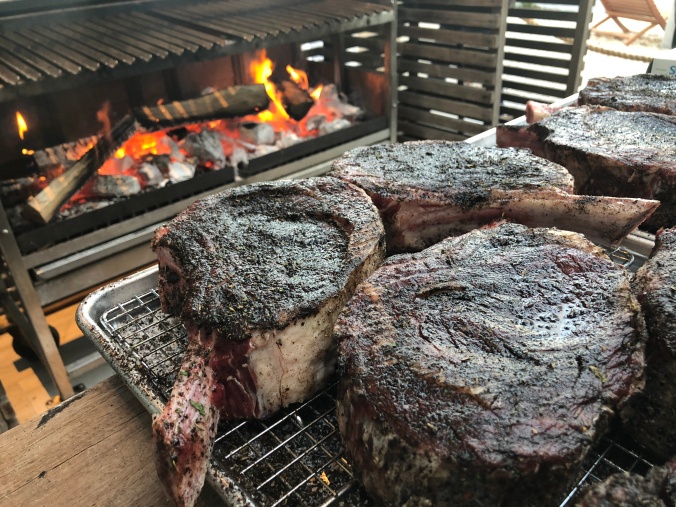 Now the company’s genetics and foraging expert, Dr. Williams is a sixth generation farmer and holds a B.S. and M.S. in Animal Science from Clemson University and a
Ph.D. in Genetics & Reproductive Physiology from LSU.  He has focused on soil and regenerative farming techniques to develop a grazing cocktail for the cattle comprised of 18-24 different plants including legume. Happy cows indeed. In three years, they were able to lower impact costs and eliminate use of pesticides and insecticides. This is not what your extension agent is telling you to do. This is not only maintaining soil health through a natural process, but restoring pastures to the way it used to be.  Bison will be next, the ultimate expression of this principle, because of course, prairie animals don’t belong on feed lots and there are only a handful of suppliers even doing grass.  Joyce will be field harvesting, because bison don’t like to be handled and agitation manifests bad flavors in the final product.  It’s a full-on, holistic approach to the entire ecosystem around commercial livestock and a commitment to doing it right.

“This doesn’t work if you grab a jug every time you see a pest. You have to rethink what that bug is,” he reflects.  “It’s not actually a pest. It’s an insect, and the good ones out number the bad.”